To be premiered in week 7 in Stavanger Concert Hall, Norway. The work is commissioned by Stavanger Symphony Orchestra in collaboration with RITMO, University of Oslo.

Librettist and actress Beate Brox will do her third performance of our work with a chamber ensemble from Bergen Philharmonic Orchestra on 4th February in the Grieg Hall.

To be premiered October 13th, 8 pm at The Nordic Black Theatre, Oslo 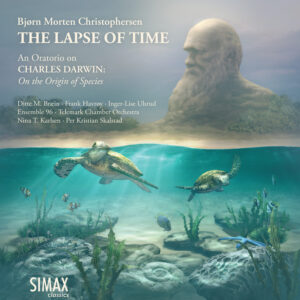 My oratorio The Lapse of Time is based on poetic excerpts from Charles Darwin groundbreaking book On the Origin of Species will finally be released on Simax October 21th, recorded by Ditte Marie Bræin (soprano), Frank Havrøy (baryton), Inger-Lise Ulsrud (organ), Ensemble 96 (chamber choir), Telemark Chamber Orchestra and the conductors Nina T. Karlsen and Per Kristian Skalstad. Listen

Listen to NRK Broadcast of Krigsseilerrekviem

Libretto and about the work

The libretto and more info about the work is now available on The Norwegian Navy Band’s web pages.

Listen to the Norwegian Opera’s podkast about Krigsseilerrekviem

Concerto for Violin and Orchestra. Performance in Oslo

My two first String Quartets will be premiered at Ålesund Chamber Music Festival 2022: «No 1 or » to be performed February 3rd at 1900 at Sobra Scene and «No. 2 or !» February 6th at 1700 in Ålesund Church. Both by Ålesund String Quartet.

The Lapse of Time concert and recording

Scherzo Patetique will be premiered by The Progression Ensemble

To be premiered by Ålesund String Quartet in February 22.

Scherzo Patetique for the Progression Ensemble

A new work called Patetisk scherzo for The Progression Ensemble, Oslo is completed. Premiere to be announced later.

A commission for a new female choir work is supported by The Norwegian Composers fund.

The Lapse of Time canceled

Concert and recording of the oratory The Lapse of Time is canceled due to corona restrictions in Oslo. New date: February 2022.

Due to a corona outbreak at The Norwegian Opera and Ballet the premiere is canceled. New date to be announced later.

Krigsseilerrekviem (Requiem for Sailors at War) Premiere at the Norwegian Opera and Ballet, Oslo

Finally tickets are available for the premiere of a 85 minutes Requiem to commemorate Norwegian merchant sailors who contributed and suffered so much during World War II. Excerpts form sailors’ own letters, diaries and memoirs are woven into parts of the requiem liturgy.  Hence, ten seafarers speak for themselves about their fears and sufferings through this large-scaled musical drama written for The Norwegian Navy Band and The Norwegian Opera Choir, soloists Tora Augestad, Bror Magnus Tødenæs, Yngve Søberg and Jens-Erik Aasbø and conductor Bjarte Engeset.

While most of the music business is closed down Oslo Philharmonic Orchestra has premiered Eventyrskogen digitally. This children’s concert is about the trees in The Magic Forest that long to become musical instruments.

Ålesund Symphony Orchestra has commissioned a large-scaled work for four soloists, choir, organ and orchestra for their anniversary season. The work will be based on various texts reflecting the life of @Rollon, first duke of Normandy, who apparently is identical to the Norwegian viking Gange-Rolf.

The Norwegian chamber choir Uranienborg vokalensemble conducted by Elisabeth Holte has released a new album with Norwegian psalms on 2L for which they commissioned a work by me. Dagvise combines two Pentecost psalms. The score is published by Cantando.

Again I have turned to texts by the Norwegian poet Gro Dahle for this commission from Bærum pikekor and their conductor Ingrid Stige. The work Vil du høre? Would you like to listen?) will be premiered 11th April at 1800 in Helgerud church outside Oslo.

My new piano trio Living Fossils will be premiered by Ai-Ling Chiu, Audun Sandvik and Tor Øyvind Hummelsund in Ålesund church tonight at 1800 on the final concert of Ålesund Chamber Music Festival.

Vårklokken vår: Premiere in the Hurum hall in Oslo

The choral work Vårklokken vår, commissioned by Barbro Berg and written for amateur singers, only with graphic notation, will be premiered in the Hurum hall 27th Jaunuary at 1930.

The Royal Norwegian Navy Band has commissioned a new large-scaled work by me for soloists, chorus and wind band for 2020. More details will follow.

The chamber choir Uranienborg vokalensemble will record my Dagvise on 2L in June 2018 for their new album with compositions and arrangements based on Norwegian psalms.

Violin Concerto on tour in Taiwan

Ai-Ling Chiu and the Taiwanese Counterpoint Ensemble conducted by Lars Thomas Holm will perform my Concerto for Violin and Strings on three concerts in Taiwan in October 2018.

The Grammy nominated choir Ensemble 96 take up the success from 2016 and perform my Kortmesse langt borte frå for soloists, choir and orchestra in Tønsberg Cathedral (28.04.18) and Moss Church (29.04.18).

I’m currently working on a new Piano Trio called «Living Fossils» for violinist Ai-Ling Chiu, for whom I wrote the Violin Concerto that was premiered in Ålesund in 2017.

The Grammy nominated choir Uranienborg vokalensemble will premiere my new choral piece Dagivse on Oslo International Church Music Festival 06.03.18. They will perform the work again on their tour in Telemark and Vestfold in May. 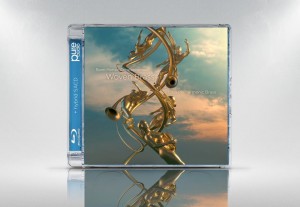 This album is spun out of the musical friendship between Christophersen and Haltlia, and features whirling overtone spectra, virtuosic gestures, beautiful melodic ambiguity and quiet spaces – musical moments and extended structures – all woven together into an hour-long musical narrative. Bjørn Morten Christophersen is continually in pursuit of new musical stories. Whether writing for choir, orchestra, chamber ensembles or TV drama, a clear voice always carries the narrative. The six musicians gathered for this recording are all members of the Oslo Philharmonic Orchestra, and they play together in the ensemble Norwegian Brass Expo. They are among the best and most experienced brass players in Scandinavia and come from a Nordic brass tradition advocating a homogenous and beautiful sound.

Immersive Audio is a sonic sculpture that you can literally move around and relate to spatially; surrounded by music you can move about in the aural space and choose angles, vantage points and positions. Dolby Atmos and the Auro-3D on this Pure Audio Blu-ray delivers a new standard in immersion, fully enveloping the audience in a cocoon of life-like audio. Recorded in discrete 9.1 at DXD resolution.

My new album Woven Brass featuring chamber music for brass composed during the last 14 years is soon to be released on 2L. 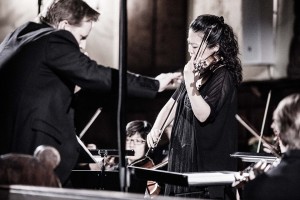 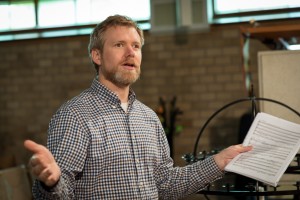 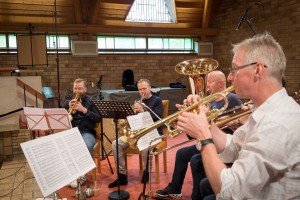 Grammy nominated Uranienborg Vokalensemble and their conductor Elisabeth Holte have commissioned a new choral piece SATB based on a Norwegian psalm for their new album to be recorded by 2L.

Concerto for Violin and Strings

The brand new Concerto is to be performed by soloist Ai-Ling Chiu and Ålesund Chamber Soloists at the Ålesund Chamber Music Festival in west coast Norway on 18th June 2017 in beautiful Ålesund Church.

The Norwegian female choir Bærum Pikekor has commissioned a new work to be performed in 2018.

My choral work «Oak and Mayfly» is nominated to Musikkforleggerprisen (Music Publisher Prize) in the category of Classical/Contemporary music. Score available here.

My new work for soloists, choir and orchestra will be premiered 30.10.2016 in Fagerboerg Church, Oslo by chamber choir Ensemble 96 and musicians from Oslo Philharmonic Orchestra, Ensemble Allegria and The Norwegian Soloists Choir. Nina T. Karlsen will conduct the premiere. The work is a comment to the mass ordinario and will be performed in junction with Haydn’s Nelson Mass. The lyrics of my works are gathered from the norwegian poet Paal Helge Haugen’s poem «Missa Brevis» and Danish Catholic song masses from late 19th century. My work is about faith, no faith, and a longing for something to believe in.

Ensemble mise-en commissioned a work for flute, clarinet, trombone, violin, contrabass and piano which will be performed on June 24 during the mise-en music festival. See program here. I will also be giving a composer talk on the 23rd.

Ålesund Chamber Music Festival has commissioned a new concerto for solo violinist Ai-Ling Chiu and Ålesund Chamber Strings. To be premiered in June 2017. The commission is supported by Det norske komponistfond.

New work for choir and orchestra

Ensemble 96 and conductor Nina T. Karlsen have commissioned a new work for choir and chamber orchestra. This will be a response to Haydn’s Nelson Mass. Both works will be performed in October 2016 in Oslo. The commission is supported by Arts Council Norway.

I completed my PhD degree today with a disputation on my thesis Panoramic Constraints: A Study of Johan Svendsen’s Musical Sketches and Exercises at the University of Oslo. Opponents were Professor Daniel Grimley (Oxford University), Associate Professor Owe Ander (Stockholm University) and Professor Hallgjerd Aksnes (University of Oslo).

I am nominated to the Norwegian Music Publisher’s Prize in the category «Break through of the year».

Oak and Mayfly released with video

I have been selected to compose a new work for flute, clarinet, trombone, violin, contrabass and piano for the mise-en music festival in New York in June 2016.

with orchestral arrangements by Christophersen. Released on vinyl.

I have been granted a scholarship fro Komponistenes vederlagsfond to compose a new work for these wonderful musicians.

My performance version of the sketches for Johan Svendsen’s third Icelandic melody for string orchestra is premiered in the Levinsalen, Norwegian Academy of Music at 18:00

Oak and Mayfly recorded by Schola Cantorum on 2L

The 6 part a cappella work Oak and Mayfly is recorded Uranienborg kirke by Schola Cantorum and Tone Bianca Dahl for 2L and producer Morten Lindberg.

The 6 part a cappella work Oak and Mayfly is performed by Schola Cantorum and Tone Bianca Dahl in Majorstuen kirke at 16.00

A Just-Finishing Candle will be performed by Ensemble 96, conducted by Nina T. Karlsen at Ridehuset, Akershus Fortres on 23.11.14.

New Choral Piece based on a H.C.Andersen fairytale

My latest a cappella work called Oak and Mayfly is commissioned by Schola Cantorum will be premiered on the choir’s 50th Anniversary Concert on the 14th November 2014 at 19.00 in the University of Oslo Aula.

The Norwegian band Datarock and Stavanger Symphony Orchestra will premiere Datarock The Musical September 6th in the new concert hall in Stavanger. I have arranged all the songs for orchestra. This will be a crazy meeting between a rock band and vigorous Hollywoodian orchestral sound.

The Lapse of Time

On commission from Ensemble Dali and conductor Eirik Sørborg I have composed a large-scaled work for two soloists, choir, orchestra and electro acoustics. It will be premiered 2. and 3. November 2013 in Kristiansund and Ålesund. The project is supported by Arts Council Norway.

The work is based on Charles Darwin: On the Origin of Species by Means of Natural Selection (1859). For a long time I have filtered a number of passages that I find both beautiful and important to the understanding of evolution. The core of this work is the beauty of human knowledge through natural science.

Johan Svendsen (1840–1911) was probably the most important contributor to a symphonic  tradition in Norway in the second half of the 19th century. His works, including two notable symphonies, were performed regularly during his lifetime. Several sources have claimed that  Svendsen worked on a third symphony, but it may seem that he was un-able to complete the work as his compositional activity waned in the 1880s. However, a famous anecdote would have it that his wife, in a fit of jealousy, burned the completed manuscript. In 2007, conductor Bjarte Engeset identified sketches for a cyclic symphonic work by Svendsen. I have elaborated and arranged parts of the material for a celebratory concert marking the centenary of Svendsen’s death. A performable version, so to speak, of the sketches, to my mind throws new light not only on an unfinished or lost symphony but may also be a valuable contribution to understanding artistic development, as this material demonstrates a more dramatic musical language than most of his earlier works.